Fossil fuels have been used as fuel for many centuries and are still the biggest energy source for generating electricity. In fact, around 75% of electricity in the UK still comes from power plants that rely on fossil fuels.

Unfortunately, coal and oil are not renewable energy sources, meaning there is a finite amount available. On top of this, the burning of coal and oil creates huge carbon emissions, which has significantly contributed to the climate crisis we currently face.

Governments around the globe are under increasing pressure to reduce carbon emissions. But with almost every home and business in the world relying on electricity, it’s not as simple as simply banning the use of fossil fuels in energy production.

If we are to achieve a carbon zero future, then we need to look for alternative energy sources.

Although fossil fuels are still the biggest fuel source for electricity generation, there are plenty of alternatives. Every day, technologies are being developed to help make these alternative solutions more accessible.

Let’s take a look at the pros and cons of some of the most viable energy sources.

Even though wind power is seeing rapid growth, it still remains small on a global scale. The good news is this means there is plenty of scope to increase the use of wind for electricity generation.

Turbines are getting bigger and more efficient. And technologies for capturing wind at high altitudes could increase the amount of electricity generated.

Wind power does have limitations. The infrastructure needed takes up a lot of space. Offshore wind farms allow the turbines to be built out at sea, but it’s harder to access the electricity they generate.

However, this is an area with plenty of scope for growth. The good news for the UK is that we have only just started to tap into the potential for wind energy provided by the North Sea.

The benefit of using dams to generate power is they can, in effect, be turned on and off like a tap to cope with peaks in demand.

Unfortunately, dams and reservoirs take up a lot of space, and many countries do not have hydropower resources. The most suitable locations have already been utilised, meaning there is little room to further exploit this technology. They also have a negative impact on the ecosystem.

Existing hydroelectric power plants make a good backup resource for when other energy sources are in short supply. But it is unlikely this source of energy will be developed much further.

Oceans offer two types of kinetic energy – tides and waves. Neither is being utilised on a large scale, but research and development projects are underway to harness this energy source.

Tides are predictable, so if technology can be developed, it would make it easier to manage demand. Unfortunately, there would be limitations for countries that don’t have a coastline.

The reputation of nuclear power took a severe hit in the 80s after the disaster in Chernobyl. However, nuclear power is still contributing a sizeable percentage of the world’s energy.

While Uranium is a limited resource, it isn’t particularly rare, and it isn’t the only naturally occurring element that can be turned into nuclear fuel. Breeder reactors are also being developed, which could, in principle, enable the world to go 100% nuclear.

However, nuclear power plants aren’t cheap to build, some of the technologies are still being developed, and there is a lack of skilled workers who can safely build and operate nuclear power plants. There’s also the unsolved problem of how to dispose of nuclear waste – until a long-term solution is found, this will remain a major concern.

Wood, crop residue, and other biological sources were being used for fuel long before fossil fuels became widespread, and they are still widely used today.

Biomass works well on a small scale, but it is unclear whether it would make a viable solution on a large scale. The effects of biomass dependency could be detrimental to the ecosystem, with large-scale land clearance, pestilence, and drought all posing a threat.

The earth’s core contains vast amounts of heat, making geothermal electricity an option, but the technologies are still limited.

Currently, only a handful of countries produce geothermal electricity, and of those that do, it still makes up less than 15% of their power.

But while geothermal electricity is difficult to generate, other geothermal technologies are being utilised. Ground source heat pumps are being used to heat homes and buildings, providing an eco-friendly alternative to fossil fuels and gas-powered systems.

Solar energy is probably the most reliable source of power as the sun effectively provides unlimited fuel.

Of course, the downside is that solar cells don’t generate any electricity during hours of darkness, meaning countries with shorter days and greater cloud coverage are at a disadvantage.

That said, newer technologies do allow for solar energy to be collected and stored, meaning that the energy can be used even when the sun does its daily disappearing act.

Another advantage of solar panels (or photovoltaics) is that they can be installed on a small scale while still generating adequate power. This makes solar power accessible to homeowners and businesses who want to generate their own renewable energy.

In general, solar power is viewed as the most promising carbon-free energy source, especially if the technology for storage is developed further. 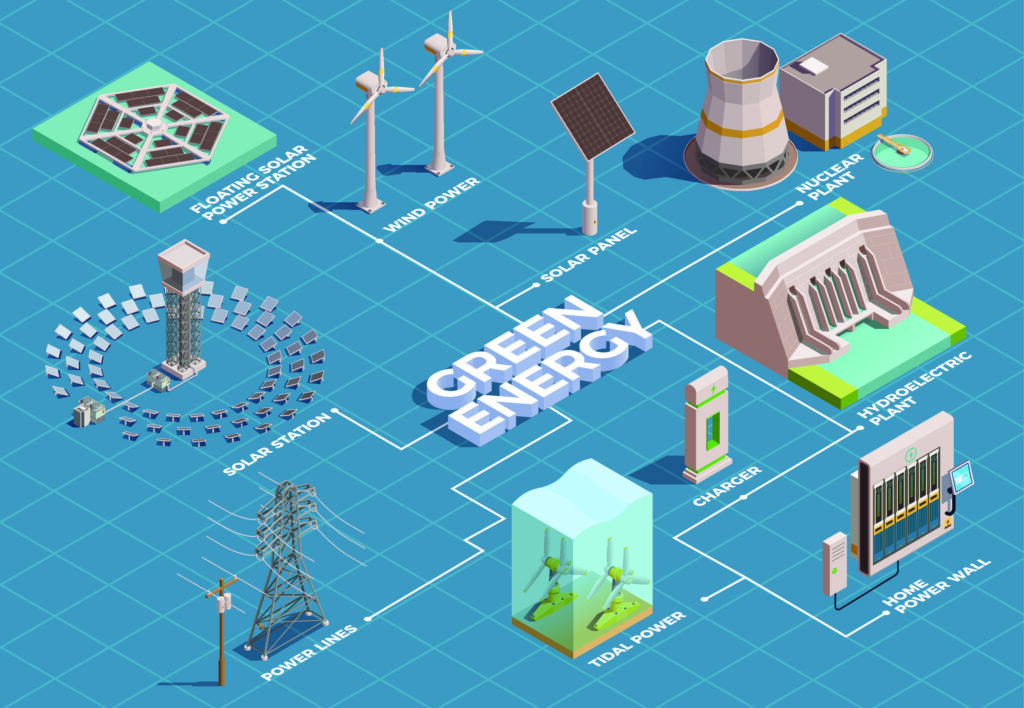 Generating your own energy

You might think generating your own electricity is reserved for big corporations and multinationals, but that’s not the case.

Smaller businesses can produce their own electricity, and in some instances, government funding is available to help with the initial investment.

There are many benefits to producing your own electricity, and these include:

Price protection - you aren’t subject to price increases or fluctuations

Lower cost – electricity bills include third-party costs, which can make up as much as 60% of the bill

Source of revenue – if you have excess electricity, it’s possible to sell it to nearby consumers or suppliers

Less waste – control how much power you produce, and store any excess power to be used at peak times

Improve your brand image – demonstrate that you are committed to sustainability

Wind and solar power are the most viable options for smaller businesses. Wind-solar hybrid solutions are also an option, allowing you to benefit from sunshine in the summer months and make use of the wind during the winter.

Moving towards a carbon free future

While governments work on strategies to tackle climate change, businesses and individuals should develop their own plans to minimise carbon emissions.

At AES, we’re committed to doing our bit for the planet and helping our clients reduce their emissions too.

As part of our mission to collectively reduce carbon emissions, we offer free energy reduction audits to manufacturers.

You’ll receive a full report detailing where energy consumption savings can be made and the cost savings to your business.

If you’d like to start your journey to energy efficiency, get in touch to find out how AES can support your sustainability targets.

5 most common electrical problems in factories

Manufacturers rely heavily on electricity, often grinding to a halt if  electrical problems occurs. What’s more, serious electrical faults can trigger a fire or explosion, leading to injuries or, much worse, fatalities. As a plant or production manager, you don’t need to understand how to fix your factory’s electrical faults yourself – that’s our job. […]

Recent increases in energy costs mean power consumption has become one of the biggest concerns for companies in the manufacturing sector. Streamlining the production process to remove unnecessary and costly consumption points is a good exercise. But one of the easiest and most effective ways to manage energy consumption and reduce costs is voltage optimisation. […]

Customer demand can peak and trough, but if demand for your products is constantly rising, it could be time to expand. However, upsizing a factory is not straightforward. There are multiple components to think about before you begin to extend, and you might even find that relocation is a more viable option (although this is […]

While many modern machines are created with automation in mind, countless factories still run on old, inefficient technology. But without efficient equipment, systems and processes, your costs become unpredictable. If you’re still using outdated technology in your manufacturing plant, you’re likely paying over the odds for staffing, machinery and utilities. And old equipment isn’t just […]

As a sector, manufacturing is responsible for using millions of megawatts of energy daily, long since a concern for anyone managing production and even more so in a period when commercial energy costs are heading upwards. With energy prices rising at an unprecedented rate, it has never been more critical to consider ways to streamline […]

What are the DSEAR regulations surrounding hazardous areas?

There are many hazards in the workplace, particularly within the manufacturing sector. Consequently, a fundamental for any manufacturing business is workplace safety. Indeed, with the number of opportunities for accidents at their greatest in this type of environment – thanks to the machinery and materials used – it’s imperative you have robust procedures to protect […]